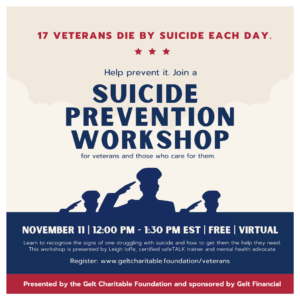 DELRAY BEACH, FL—The Gelt Charitable Foundation is sharing resources and emphasizing the importance of mental health with a free virtual workshop, “If You See Something Say Something,” for veterans on Veterans Day.

Presented by Leigh Ioffe, certified safeTALK trainer and mental health advocate, this virtual workshop will help veterans recognize the signs of struggling with suicide and how to get them the help they need.

“When we were looking into putting together this workshop, I made a post on a Facebook group for veterans, asking how many of them had been personally affected by suicide. The post went viral, and hundreds of people commented, saying they had been affected”, shared Ella Steinmetz-Simon, Director of Operations at the Gelt Charitable Foundation.

“When I saw the number of people commenting, I knew we had to do something. And that’s what made us set up this workshop”, Steinmetz-Simon said.

During this virtual training on Thursday, November 11 at 12 p.m. EST, veterans will learn to recognize when someone may have thoughts of suicide and work with them to create a plan that will support their immediate safety. The Gelt Charitable Foundation aims to change the conversation around suicide and provide veterans with the resources to handle crises that might be heightened due to their military service. Caregivers of veterans are also encouraged to participate. All participants must register online for the workshop.

Suicide is the 10th leading cause of death in the U.S., according to the American Foundation for Suicide Prevention (AFSP, afsp.org). In 2018, at least 48,344 people in the U.S. died by suicide, and there were an estimated 1.4 million suicide attempts, according to AFSP. According to the U.S. Department of Veterans Affairs, 17 veterans die by suicide each day.

The Gelt Charitable Foundation is a nonprofit organization that raises awareness and provides support for those who feel alone. Sponsored by Gelt Financial, the nonprofit specializses in criminal justice reform, lone soldier adoption, improving recovery programs, and mental health and suicide prevention. For those in a state of crisis, the Gelt Charitable Foundation is a source of comfort and promise of a stronger future. Learn more at geltcharitable.foundation.